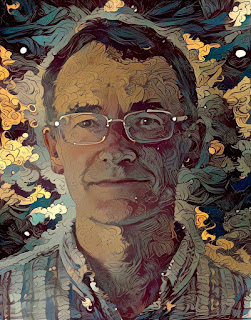 Recently, I read The Elder Ice by David Hambling. It's a Lovecraftian weird fiction novella. You can check out my review here. The author was kind enough to answer a few questions about his work, and I'm pleased to share this interview with you today!

Mainly it was a tree falling on the garden.

Our garden in suburban London backs on to some ancient woodland, which turns out to be an untouched remnant of the original Great North Wood which this area, Norwood, is named for. One night one of the great old oaks toppled over, with a prolonged, and most alarming tearing, rending sound as the roots were ripped out of the ground. The falling oak smashed down across most of the length of the garden, crushing some unfortunate fruit trees.

The cat, who was in the house with us, was completely freaked out for some time.

The fall did a certain amount of damage, but mainly I was awed by the size and age of the fallen tree. It set me to wondering why it had suddenly fallen over, what it has witnessed and what ancient things might dwell in its centuries-old roots.

That piece of forest is owned by the convent. Within a couple of days, before I had even contacted them, the entire fallen tree vanished from our garden as though it had never been. Without any word from the nuns. Which was weird. And maybe a little sinister.

Previously I had assumed that this part of London didn’t have much history; the castles, palaces and cathedrals are all in North London on the other side of the river. This event this started me looking into it. The more I found, the more I thought that Norwood’s little-known history would be a great setting for some Lovecraftian horror, with eldritch forces lurking beneath the everyday world. And so was born the Shadows From Norwood project, set largely in the 1920s melding local history with fantasy and a dash of hard science.

(1920s writer HP Lovecraft is known for ‘cosmic horror’ : the idea that human beings are pitiful specks in an uncaring universe filled with vast, powerful and incomprehensible beings. His ideas pop up everywhere from Alien to Stranger Things. He encouraged other writers to set stories in his shared universe, known as the Cthulhu Mythos.)

The main aspect is a series of novels following the adventures of Harry Stubbs, former heavyweight boxer and sometime debt-collector, in a series of encounters with the uncanny. In the opening story, The Elder Ice, set in 1925, he is on the trail of a legacy left by real-life polar explorer and local hero Sir Ernest Shackleton.

Anyone who will read!

Mainly though, I’m writing for people who like a good story well-written. Plot is important, and there tends to be quite a lot of setting up to get all the elements in place, but it’s not enough. Memorable characters are important, and there’s a great craftsmanship involved, so that you want to keep reading wherever the story goes and whatever it is about. My aim is to be good enough to do that.

I like walking, photography, birding — and nature in general — and travel. Which means a lot of trips to far-flung places to walk and take pictures of birds.

Even sitting at my desk though, I can look up and see quite a variety of bird life, including frequent visits by flocks of bright green parakeets which are now common in London.

I hope they are inspired to keep reading…and also to think about the world, and how much secret history there is all around us. Norwood may look mundane now, an unremarkable suburbia of chain shops and Victorian mass-built homes and churches but scratch the surface and you find it was the haunt of highwaymen, hermits and fortune-telling gypsies. The world is weird; we go to great trouble to avoid seeing the weirdness. Sometimes you need to lift the blinkers.

Next Big Thing is “War of the God Queen”, an epic fantasy extension of Shadows From Norwood. Jessica is hurled back from the modern era into a past where fierce warriors are battling an incursion of monsters. She doesn’t speak the language, has no friends or fighting skills, and her education is in architecture – among a nomad people with no buildings. Fortunately, Jessica is smart, resourceful and extremely determined to find her way home – even if that means defeating alien invaders first. “War of the God Queen” is in a queue to be edited in October.

I’m also excited about a collaborative project involving time travel, which is currently under wraps.

And there’s a collection of Stubbs-related short stories in the pipeline, plus the fifth Harry Stubbs novel, which has the working title “Destroying Angels.”