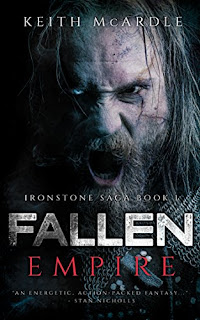 Assassin-for-hire Vyder Ironstone is on a mission for the King of Wendurlund. While the pay’s good, the odds are not, since the task requires him to travel deep into enemy territory. But first, there’s the little problem of his death to overcome, not to mention a malcontent travelling companion with no love for humanity and a deadly purpose of his own. Vyder had better find a way to deal with both, and quickly, because, controlled by an unseen power, hordes of giant spiders have attacked the capital. Facing vast numbers, Commander Tork of the King’s Own and his small troop of elite soldiers won’t be able to hold the walls for long. Vyder’s quest is vital: he must not fail, or the empire will fall.

This book is divided into three distinct parts. Each part has multiple point of view characters specific to that section of the story. They are so distinct, I think they would even function as individual novellas. For me, parts one and two were much stronger than part three in terms of character development and story progression.

Part one follows a slave after she discovers her master, Vyder, is dying. He has given her better treatment than most slaves would receive, and she desperately wants to save his life out of fear her next master would not be kind. Vyder is also the hero the kingdom is counting on, so the stakes of his survival are pretty high.

In part two, a nearby walled city is under attack. Large spiders and wolves are sneaking in and killing citizens. Initial reports can hardly be believed, but as the days pass the conflict escalates. The city is pushed further into despair as the casualties multiply with each night. This was my favorite part of the book. The tension was ever-present and the characters well-developed.

Part three involves a plot to find and rescue the prince of Wenderlund. He has been kidnapped by a hostile neighboring kingdom and his fate is uncertain. The beginning of this part was bold and exciting, but as I read through it, I had trouble connecting with the characters, and some of the circumstances of the story seemed overly coincidental to me.

All in all, it's a strong opening book to a series, and the sequel is available now, too. If you're looking for a quick, entertaining sword & sorcery read, check it out.