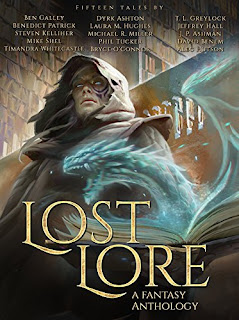 In worlds ravaged by flood, fire, and frost, mere mortals strive to make their own legends amidst demons and deities alike. And in lands racked with human strife—where evil endures and no one is ever safe—scarred heroes fight forces even darker than their own personal demons.

Why do they fight? Some seek to better the world, or themselves. Others are out to right old wrongs. But whatever their goal - reward, redemption, or just respite - the truth will out eventually. For no story is ever truly lost so long as there exists one to tell it.

This is a great way to sample indie authors you may have heard a lot about or enjoy new stories from your favorites. Like many anthologies, there were some stories I loved and others I struggled to finish. The theme of lost lore works well here, though. There's a prevalent mood that the reader might stumble upon some hidden secret at any moment. It is interesting to see the different ways authors interpreted the theme, some extremely inventive.

A few stories that stood out the most for me include "And They Were Never Heard From Again" by Benedict Patrick, "I, Kane" by Laura M. Hughes, "The Huntress" by Michael R. Miller, "The Prisoner" by Phil Tucker, and "The First Thread" by Alec Hutson.

If you're looking for sword and sorcery steeped in lore, where history or myths are important parts of the story, be sure to check out this collection!

Email ThisBlogThis!Share to TwitterShare to FacebookShare to Pinterest
Labels: Reviews