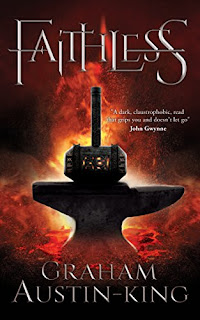 The temples of the Forgefather have fallen. The clerics and defenders that could once be found across the nine lands are no more. Priests huddle in the great temple, clinging to the echoes of their lost religion. But the Father has fallen silent. There are none who still hear his voice.

The mines of Aspiration lie far below the temple's marble halls. Slaves toil in the blackness, striving to earn their way into the church and the light. Wynn has been sold into this fate, traded for a handful of silver. In the depths of the mines, where none dare carry flame, he must meet his tally or die. But there are things that lurk in that darkness, and still darker things within the hearts of men.

When the souls bound to the great forge are released in a failed ritual, one novice flees down into the darkness of the mines. The soulwraiths know only hunger, the risen know only hate. In the blackest depths Kharios must seek a light to combat the darkness which descends.

This book has been on my radar since it came out two years ago. I finally made room for it between review requests. I had heard so many great things about it and went in with high expectations. I've been excited about reading this book for so long. I only hoped it would come close to the praise I'd heard. Despite all that, I was not prepared for what this book would do. Faithless shocked me and enthralled me and completely blew past all my highest hopes. It's original, immersive, and dark, with raw fear and a faint speck of hope.

We hear a lot about fight or flight, but if you study self-defense for a little while, you'll find out there are actually three responses: fight, flight or freeze. Our poor main character, Wynn, freezes up in the face of violence and fear. It makes him oh so relatable. He's not a coward, he's not a hero. He is trying to survive, and sometimes such survival leans on the darkest side of desperation.

Wynn is new to the faith, having been sold to the temple by his father. He's a skeptic to begin with and thrown into a dwindling religion, he's trying to make the best of it, but it's a difficult path ahead of him. The old church has fallen from its days of glory, shrunk considerably in size, wealth, and knowledge. Corrupt and ignorant, yet full of old ritual, the worshippers of the Forgefather have few options in their future. Wynn starts out in the mines and works hard to learn forging in hopes of earning his way into the temple, which he presumes would be an easier life.

As if to answer Wynn's assumptions, we also follow the character Kharios, an novice priest who serves in the temple. Through his experiences, we learn firsthand what life there is like, the trials and chores he must perform, and the teachers and priests he must obey. Kharios is a hard worker, but lacks confidence, and the tragic circumstances around his training don't help his unsteady faith.


Denial, survival, acknowledging the darkest depths of humanity, the author doesn't flinch from troubling themes. Neither does he flinch from plumbing the depths of the human spirit. While the climate and characters are full of cynicism or conspiracy, there is room for hope, and Austin-King pushes these characters past their breaking points to find the stuff they're truly made of.

Faithless is a new all-time favorite novel for me. This story had me gasping at the horror and the grace, the darkness and the fragile truth. Well done, bravo to Mr. Austin-King! I would give a standing ovation to this one, and I want so badly to see a movie adaptation.