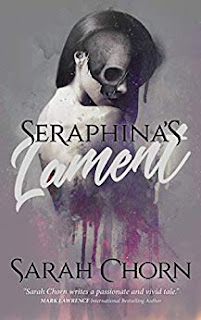 The world is dying.

The Sunset Lands are broken, torn apart by a war of ideology paid for with the lives of the peasants. Drought holds the east as famine ravages the farmlands. In the west, borders slam shut in the face of waves of refugees, dooming all of those trying to flee to slow starvation, or a future in forced labor camps. There is no salvation.

In the city of Lord’s Reach, Seraphina, a slave with unique talents, sets in motion a series of events that will change everything. In a fight for the soul of the nation, everyone is a player. But something ominous is calling people to Lord’s Reach and the very nature of magic itself is changing. Paths will converge, the battle for the Sunset Lands has shifted, and now humanity itself is at stake.

First, you must break before you can become.

Seraphina's Lament is unlike anything I have ever read. It's set in a communist state, which had recently been a monarchy, overthrown by the current premier.

Though it's named after Seraphina, the story belongs to several POV characters as much as it belongs to her. She is a slave of the premier, and her twin brother an escaped former slave, working with an underground resistance movement.

While this small group is fighting to help people flee and revolt against the premier, larger forces are at work, bringing about the end of civilization and the rise of a new age. It's a combination of an apocalypse and a creation myth. The varying forces at work against the characters is a unique experience.

The magic is based on controlling elements, different characters born with the ability to control a certain one. Seraphina is a fire talent, and her twin, Neryan a water talent. Watching their relationship change and unfold is an amazing, powerful component of the story.

I loved this book. It was easy to stay immersed in it. Chorn's beautiful style swept me up into an alternate state of mind that just lived for this world and stayed there. There's an otherworldly quality to much of the story, and Chorn's style is lyrical and poetic, full of emotion in a raw and beautiful way.