Review: Those Brave, Foolish Souls from the City of Swords by Benedict Patrick 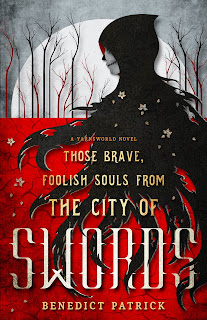 Don't draw your blade in the City of Swords, unless you're willing to kill… or ready to die.

Young and filled with idealistic fervor, Arturo packs his blade and travels to the fabled City of Swords in the hopes of joining the dashing Bravadori. Yet upon arriving he discovers these masked vigilantes have more in common with brutal thugs than noble monster slayers. Disillusioned and mocked, he stubbornly refuses to give up his dreams.

When an impending bandit attack threatens untold depravities upon a distant village, and no others will heed the call for help, Arturo joins forces with a worthless outcast and a walking legend to attempt the impossible, to traverse the demon-haunted wilderness and prove that in the City of Swords, true heroes can rise from the unlikeliest of places.

Those Brave, Foolish Souls from the City of Swords is a gritty, action-packed standalone novel set in Benedict Patrick’s Yarnsworld, a land where folktales and fantasy mix, where the monsters from stories are real.

We follow the adventures of Arturo, a young warrior who wants to build a name for himself as a hero in Espadapan, the City of Swords. There's a long oral history of heroic, masked swordfighters and their impressive feats. Shortly after arriving, Arturo realizes he must find his own way to help others or succumb to a culture of bravado and greed.

When a villager from the Wildlands comes seeking help, Arturo decides the only way to make his own legend is to leave the City of Swords and genuinely seek to help others. He manages to draw a couple more warriors with him, and together they head out to save a small village and defeat the bandits harassing them.

Naturally, by the time they arrive at the village and scope out the nearby bandits, there's much more to the story. Their success seems hopeless, yet the fate of an entire village is at stake. Will this small, unlikely band of heroes find the courage to fight? Should they even try to live up to the old, legendary tales? At what point does bravery become foolishness? In between chapters we are given short folktales that flesh out the culture and add to the story in progress. It's a wonderful way to bring richness to the reading experience. The world building is based on Mexican history and legends, set partly in a city and partly in the wilderness. A juxtaposition of old and new religions also plays a part as the story unfolds.

I so enjoyed this book! It's fun, daring, and meaningful. If you like swashbuckling heroics mixed with original mythology, definitely check this one out!