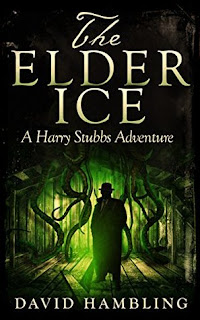 In this atmospheric novella, ex-boxer Harry Stubbs is on the trail of a mysterious legacy. A polar explorer has died, leaving huge debts and hints of a priceless find. His informants seem to be talking in riddles, and Harry soon finds he isn't the only one on the trail -- and what he's looking for is as lethal as it is valuable. The key to the enigma lies in an ancient Arabian book and it leads to something stranger and more horrifying than Harry could ever imagine.

Harry may not be an educated man, but he has an open mind, the bulldog persistence and a piledriver punch -- all vital for survival when you're boxing the darkest of shadows.

The story of mystery and horror draws on HP Lovecraft's Cthulhu Mythos and is inspired by Ernest Shackleton's incredible real-life adventures.

Debt collector Harry Stubbs has been assigned the case of the late explorer Ernest Shackleton, who left a lot of debts unpaid when he died. Harry is searching for any possible treasure the explorer might have hidden away somewhere that would help repay the debt.

He does manage to find a suspicious box and knows he's onto something when he gets attacked in an alley. Then the added mystery of tracking down his attackers and finding out what part they played in the hidden fortune becomes his priority.

The mystery leads Stubbs to find out more about unusual creatures that can hibernate almost indefinitely and a rare, inexplicable discovery.

This was an enjoyable and quick read. It's set in England in the 1920s and has a strong British tone. Hambling does a good job of setting a mood that feels mostly practical yet brings in an eerie atmosphere when needed. It brought up some interesting paranormal possibilities and does a great job of melding reality with the unreal.