Review: The Saint of Liars by Megan Mackie 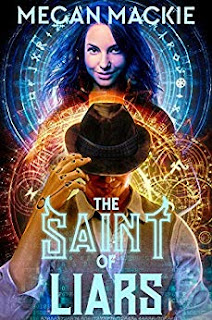 It's been two months since Rune Leveau, aka Anna Masterson, survived the machinations of the Kodiak corporation and things have been relatively peaceful in the iconic bar, the Lucky Devil.

The corporate entities that rule her Chicago are not through with the Finder yet and the other powers-that-be don't intend to be left in the dust. The key is finding the Masterson Files, a computer program with the impossible ability to cast magic. Now the Magic Guild is wanting a word with her and as trouble in the form of the Faerie King converges at her bar, Rune finds herself in the center of warring factions battling it out with bullets and magic.

Which is exactly the right moment for the cybernetically augmented corporate spy, St. Benedict to come back into her life. But can these two survive the lies that lay between them? More importantly, can Rune get the Saint of Liars to help her answer the one question she's burning to answer: where is Justin Masterson?

Rune Leveau thought she understood who she was, but when she gets attacked in an alley and saved by the cyberspy St. Benedict, questions from her past come rearing back to plague her.

Her cousin shows up and has a few answers, but before Rune can really understand her abilities, they are pulled into a mysterious conflict centered around the lost work of Rune's ex-husband.

In this follow-up to The Finder of the Lucky Devil, magic and technology collide and merge in a way I've never seen. Corporations are racing to unlock a technology that would allow computers to cast magic spells, thus leveling the field and making magic users obsolete. Is that a power anyone should rightly have? And what price must be paid to develop it?

At the heart of this war of industry hangs the misery of the broken-hearted. The fate of all magic beings depends on the fragile relationships of a small group. Our heroes must travel into a magically enhanced virtual reality and find the source of its manifestation. If they can work out their differences and work together, if they can set aside their feelings and focus on their destiny, they might find a way to survive this mission. Unless computer viruses destroy them first.

This book was a lot of fun and a great cyberpunk that blends magic with technology in a modern-day Chicago setting. There's more than one tragic couple, and plenty of nail-biting tension.