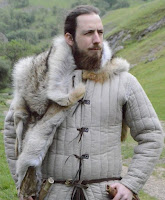 Dark fantasy author Rob Hayes is a finalist in the current Self-Published Fantasy Blog Off (SPFBO). Not too long ago, I reviewed Where Loyalties Lie, the first book in his critically acclaimed Best Laid Plans duology. I'm eagerly looking forward to reading the second book later this month. His style is action-packed and his characters are scoundrels. It's truly fantastic. Here are some insights into his work.

I think that's a many faceted question. There's certainly no one thing that inspires my world building. I take inspiration from the books I read, the films I watch, the games I play, the artwork I see. And also from the real world we inhabit. It all comes together in a way I don't entirely understand myself.  When I was building First Earth I certainly took inspiration from medieval Europe. The first kingdom I was creating is the Five Kingdoms and it has knights and nobility and peasants, in many ways its a small microcosm of what medieval Europe was, but focused in a much larger world.   Across the ocean from the Five Kingdoms is the Untamed Wilds and that's a place that was very much influenced by the wild west. It has dozens upon dozens of little towns each with their own laws and governors, and all surrounded by a largely lawless expanse. Bands of outlaws roam the land, and deputised bounty hunters try to bring them in.   Across another ocean is the Dragon Empire, a land loosely based on feudal Japan... but with dragons. So the world itself is a bit of a mash up of different cultures across different times. I wanted it to feel large and lived in, and the best way I could think of achieving that was having many different places and people mentioned, and sometimes visited.

But the inspiration certainly doesn't stop at those real world comparisons. I like to think I took the bleak aspect from the Warhammer universe. The dark political gaming from A Song of Ice and Fire, the sense of there always being somewhere new to explore from World of Warcraft. Honestly, I'd say the list of inspirations for First Earth are too numerous to count. I take inspiration from everything and put it all into my fiction.


Who are you writing for and why?

It might sound a little cliched, but I write for myself. I write the stories I want to write, in the worlds I want to write. I've never been the type of person who looks at what is popular at any given time and tries to follow it. Hopefully one day the two things will align and my popularity will soar... along with the book sales to prove it.

As to the why. I have stories in my head. I have worlds and characters and concepts. I'm a dreamer, always have been. I was that kid in school who stared out of the window dreaming of orcs and aliens and heroes and villains. Eventually I decided I wanted to share those stories with others. I wanted to introduce the worlds and characters I dream to the world, so they'll still exists in some form or another, even if I've moved on.


What do you do to recharge your creative energy?

I'm a gamer to my core. I finish writing for a day and like to load up something on my xbox and let the mechanical motion of moving within that world switch my mind off. It helps with the aforementioned inspiration, but it also helps me debrief after a day of existing in my own world.


What reactions do you hope to inspire in others?

There's no greater reaction you can inspire in others as making them want to do what you do. Maybe one day someone will pick up writing in their own world and say my work was an inspiration to them. And I think I'd be very happy at that.   Also, I'd like to inspire others to buy more of my books. :D


Where is your writing taking you?

Everywhere. I don't like staying still for too long. I'm always creating new places and characters. From dipping my toes into science fiction, to trying my hand at a fantasy YA epic. My writing takes me wherever my imagination leads, and who knows what will inspire that from one day to the next?