Review: The Heart of Stone by Ben Galley 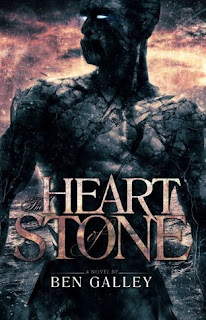 Merciless. Murderer. Monster. He has been called many names in his time.

Built for war and nothing else, he has witnessed every shade of violence humans know, and he has wrought his own masterpieces with their colours. He cared once, perhaps, but far too long ago. He is bound to his task, dead to the chaos he wreaks for his masters.

Now, he has a new master to serve and a new war to endure. In the far reaches of the Realm, Hartlund tears itself in two over coin and crown. This time he will fight for a boy king and a general bent on victory.

Beneath it all he longs for change. For something to surprise him. For an end to this cycle of warfare.

Every fighter has a last fight. Even one made of stone.


Task is a stone golem hundreds of years old. But something went amiss in his construction, and he has a sense of conscience independent from following his given master's orders. We begin the story with Task arriving at his newest master, purchased as a weapon in yet another war. The war experience in this story feels authentic, including down time between battles, getting to know soldiers, cleaning up the aftermath of skirmishes. These moments in between the conflicts lead to more character insight. There's plenty of blood, rain, grit, gunpowder, broken bones, broken weapons, broken buildings, and broken men.

"There was no honour or duty here, just raw human downfall. It was easier to hate an enemy than to forgive or understand them."


This is my first read of Ben Galley's work. I have heard many praises for The Heart of Stone, and was excited to delve into this one. I had some difficulty connecting with this story and the characters, up to a point, but I believe this experience was intentional. I think, what Galley admirably achieves with this book, is that the reader's experience parallels the golem's experience with humanity. For about a third of the book, it feels like too many characters, like every other war for hundreds of years, and little reason to care much about what they are doing.

Task grew on me, slowly, but once he did I was captivated. As Task's experience kindles a new appreciation for humans, so too does the reader become more intrigued with the story. The point of view characters decrease in number and increase in depth. The down time between battles decreases, plots thicken, intrigue is revealed and backgrounds are unveiled. When I noticed the book taking this direction, I had hoped for it to avalanche, that the pacing and intensity would exponentially increase as a boulder rolling down a hill. While the pacing picks up some, it lacks a growing sense of urgency. But it morphs into something else, a growing sense of purpose, which is truly what Task has been pursuing.

There's not much difference between the soldiers on each side. The more Task understands that, the more he understands the true futility of war. And though he was built as a tool to end wars, his true desire becomes ending war. As Task goes through a transformation from skepticism and detachment, to connection and concern for the fate of the humans he fights for, the author has built a parallel experience for the reader.

The golem magic is really cool and battle scenes are well described. The Heart of Stone is filled with insightful introspection that applies to humans universally. I recommend this book to readers who enjoy a fantasy novel with rich, historical style worldbuilding, unique magic with limitations, and an unpredictable twist of events with epic repercussions.