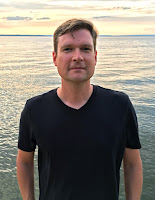 Josiah Bancroft's debut novel, Senlin Ascends, released last week through Orbit. It began as a self-published book that eventually gained sweeping attention. Through his years of hard work, Mr. Bancroft's success has inspired authors all around the world. I reviewed Senlin Ascends a couple of months ago, and am delighted to have his insight here today.

The world of the Tower of Babel is the product of many influences, including books, films, and history. I took a lot of inspiration from Victorian-era adventure writers, like Jules Verne and H.G. Wells, and from magical realist authors like Italo Calvino, Jorge Luis Borges, and Gabriel García Márquez. I wanted the series to have a cinematic feel, and so I used some of my favorite films as points of reference, both for scenes and for some of the set pieces. Fritz Lang’s Metropolis, Hayao Miyazaki’s Spirited Away, and Terry Gilliam’s Brazil are all present in different ways.


Who are you writing for and why?

I had gotten to a place in my life where I was beginning to feel pretty disillusioned with my writing. I started writing when I was very young, and I just never stopped. Over the years, I went through many phases and formats and genres, but by the time I hit my mid-thirties, I realized that a lot of the passion had drained from my creative efforts. I felt like I needed to reset, to rediscover the joy of writing.

Senlin Ascends is the result of the decision to write something purely for myself, purely to rekindle my love for this whole fiddly business of piling up words. I wanted to enjoy the process; I wanted to have fun again. So, I treated the whole effort like a personal adventure. The Tower allowed me to explore a wide array of settings, ideas, and characters. It allowed my imagination and sense of playfulness to dictate the direction of the story. The book is sprawling and strange, but in a good way, I think. And the book accomplished what I hoped it would: It reinvigorated my love of writing.


What do you do to recharge your creative energy?

I’ve been playing in a rock band for about six or seven years now. We’re called Dirt Dirt, and we are in it just to enjoy ourselves. We’ve recorded a few EPs and played a few shows, but really our favorite thing to do is to rent a room in a practice studio and see how loud we can get before the monitors start to smoke. When we’re playing together, I can’t think about anything else. I can’t worry about the future. I can’t obsess about the past. There’s something about making music, especially in a group, that requires you to listen and to be present. It’s a bit like meditating, but with ear plugs and screeching feedback.

I also love to cook. I like to listen to nerdy podcasts or watch British quiz shows on my laptop as I chop vegetables and ignore the recipe.


What reactions do you hope to inspire in others?

I suppose I’d like to inspire a little more self-examination. I think a lot of anger in the world stems from private, unexamined fear. At least, I find that to be true of myself. I think it’s all right to be frightened, but if you don’t want that fear to turn into something awful, like hate or fury or self-destruction, you have to admit it. You have to throw your monsters into the light.

At the start of the story, Senlin is a bit of a smug know-it-all. He’s accustomed to being right and being in charge and being catered to. But the Tower breaks him down, piece by piece, until he is finally forced to account for his motives, to address his behaviors, and to amend his view of the world. He finds the process painful, but ultimately redemptive.


Where is your writing taking you?

I don’t know. Practically speaking, my writing is taking me to the fourth and final book in the Books of Babel series. But philosophically and intellectually, I have no idea.

I write because I don’t understand the world or myself. I write because I am often confused by the things I witness, often baffled by my own behaviors and emotions. I write to make sense of it all. I read for the same reason. It’s an ongoing effort. I make a lot of mistakes in my study of the world. I’m the king of quarrels, misunderstandings, and knee-jerk reactions. If enlightenment is a high tower, I don’t think I’ll ever see the top of it. But I do hope that I never stop climbing.