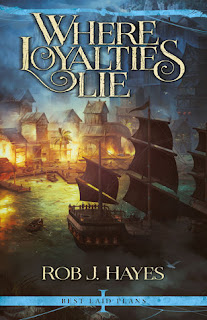 Everybody knows Captain Drake Morass is only out for himself.

As the fires of a dying city burn on a distant shore, Drake sees an opportunity to unite the other pirate Captains under his flag and claim a crown for himself. If he is to succeed, he will need allies and the Oracle named Keelin Stillwater, the best swordsman in the isles, as his right hand.

With enemy ships sailing his waters and setting fire to his cities, and the sinister Tanner Black threatening to steal the throne before Drake even has a chance to sit upon it, Drake Morass must somehow convince the other Captains that his best interests are also theirs.

Pirate captains with deep grudges and seething competition must figure a way to unite to survive the royal navy's growing pursuits to eradicate them.

This was my first Rob Hayes book. I haven't read his previous works, but that in no way hindered my reading experience. The further I got into this book, the harder it was to put down, a necessary quality for a 5-star rating from me.
There are a lot of point of view characters, and some introduced late in the book, but it served the experience of the story rather than distracting from it. When pirates are preparing for war, one wouldn't expect the efforts to be single-minded or well-organized. In fact, Hayes so wonderfully captures a tone of calculated recklessness, flamboyance, and intrigue. Each captain has a different style, with a different flavor to each ship's atmosphere.

These pirates invaded my heart. My favorite is Keelin Stillwater, who abandoned his noble upbringing to pursue a life of simple pleasures and the freedom of the sea. Okay, well I'm romanticizing that quite a bit, which is certainly not what this book does. But it's not difficult to find some connection with each character (except for Tanner Black—he can burn in Hell). Despite their lawless violence and extreme life choices, Hayes brings to life the humanity in each of them, giving us something to root for and something to dread. Even as allies are coming together, others are falling apart, and the whole plan could very easily topple completely at the whim of the sea goddess.