Review: The Shadow of the High King by Frank Dorrian 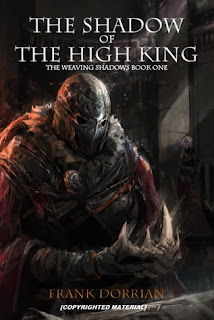 Violence, betrayal and vengeance rot Caermark from within.

King Aenwald, a murderous tyrant determined to continue his twenty-year rule, will suffer no man that lusts for power. But those who came long before the Kings of Caermark stir once again, after a hundred years of silence, and even Aenwald’s iron fist may struggle to hold them and the chaos they bring.

The mercenary lord, Arnulf, dreams of greater things than a life of bloodshed and murder. Robbed of his birthright and denied justice by King Aenwald, those very dreams may carry their price in blood for his loyal band of men, as he strives to see them made real.

The young warrior, Harlin, haunted by the atrocities he suffered as a child, struggles to come to terms with the past. Consumed by hate and obsessed by revenge, how far is he willing to go to see it done, as the horrors within his mind run unchecked and unchained?

I had heard some good things about Frank Dorrian's work, and I had a few preconceived notions about this book. I expected battle, knights, mercenaries, and some amount of ass. But I have to say, there was way more to this book than I expected.

The worldbuilding is incredible. Original races, varied cultures, and unique religions. The magic system is druidic in feel. The mythology of the Luah Fáil people holds an intriguing mix of Celtic and Egyptian vibes. Dorrian's work has an uncanny way of being crass and poetic, bold enough to handle scenes with rape or slavery, yet capable of waxing philosophical in the calm before the storm.

Pacing struggles in the first third of the book, as the chapters are long and rife with backstory. Just when I felt like things were about to get moving, the narrative would switch point of view and back up in time considerably. But that works itself out further into the book and the plot hits its stride as the characters regroup and become more active in their plans.

The main POV characters in this book are hard to like. They are all SOBs, each with an agenda of his own. Whether their actions are justified is up to the reader to decide. Their complex personalities echo their complex fates. In a war where loyalty can be bought with coin or blood, none are sure to come out with everything they desire.

The Shadow of the High King is an entertaining grimdark adventure for readers who enjoy battle, politics, religion, history, and a clash of cultures that threatens to destroy the very land they fight over.