Storytelling in Poetry -or- Wherein I Embody my Teller Name 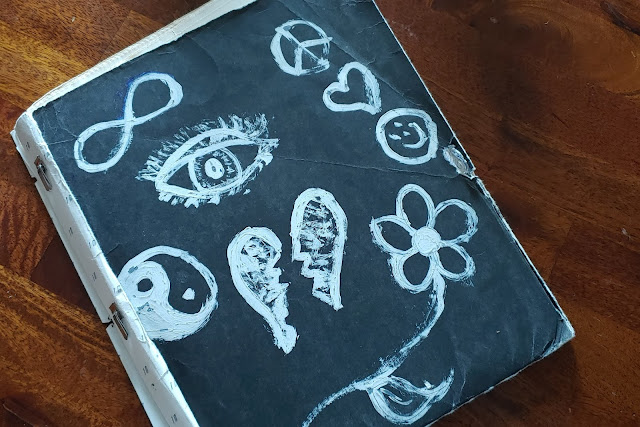 Guess what? I'm here to tell you a story.

If you follow me on social media, you've seen my poems flying around. I do this weird thing that a lot of modern poetry doesn't do. I use rhyme a lot. Almost all the time. To the point that I only use free verse for certain reasons. Rhyming is my default now. I'm wired that way. I don't know why. It's not an indication that my poems aren't sophisticated. Just pick that up and run with it.

The rhyming is easy to see, but what is easy to miss is the storytelling. Most of my poems tell some kind of story. And here's why.

I was a junior in high school, and I had spent about half of my sophomore year trying to work up the nerve to go to Writers Club and read some of my poetry. So when a new friend named Brett invited me to Writers Club, I jumped at the chance. I went to one session. I was so nervous I didn't read that day, I only listened. But I promised to read a poem the next week.

The next week never happened for me. Brett got weird and possessive about how Writers Club was his thing and I shouldn't be in it. He had lots of reasons for that that took me years to understand, but that's a different story. Here's the horrible thing he did that changed the arc of my poetry forever.

I called him later that evening and said, "Writing is really important to me. I've been writing poetry for a long time and I want to be in Writers Club."

He said, "Well, let's hear it. Read me what you wanted to read today."

So I read him this poem I called Static:

I’ve got bumblebees flying into my ears
And I’m running in place toward the wind.
It blows dirt in my eyes.
Dandelions frolic across the dried grass
And the birds in the sky try to dance,
But the radio’s broke.
Wildfire glides by the sparkling lake
And my life seems to echo away,
But it says the wrong words.
Touch
The world’s
Dark core
As your heart screams,
Smile.
Quiet, my dear.
Look,
Don’t touch,
They all seem to say.
And the eyes in the back of my head
Watch my dreams walk away.

On the other end of the phone he said, "Wow."

It sounded like a good wow, so I waited a bit then asked, "It's good, right?"

"Well, it just, it doesn't, it doesn't really say anything. Nothing is happening. Something needs to happen. It needs to tell a story."

"Slate read it today and she liked it. She said it was really good."

I was devastated. I felt foolish for thinking my work was any good, and I instantly felt like I couldn't trust anyone who told me it was.

"Look, the best way to get better is to keep writing. So keep writing poems. Read them to me—don't read them to anyone else. I'm the only one who will be honest with you, and I'll tell you when you're good enough to come to Writers Club."

Just like that, he highjacked my work. I spent months writing poems, then reading them to him, and each time he would come up with some random criticism and some generic encouragement. Never did he deem me 'good enough' for Writers Club. He didn't want me in that room at all. It took about two years before I read any of my poetry to anyone else, and by then it felt like a desperate cry for help.

The result was I withdrew, and my poems became very private for me. For decades I wrote very little. One exception was A New Day Dawns, a poem I wrote for my husband Jesse, which I did sit down to write with the intention of telling a story.

Then about two years ago, right around the time the pandemic started, and we were home all day with no routine, poetry came back to me like a tidal wave. It came with a flood of memories. It was like a dam had burst. I wrote 2-3 poems a week, sometimes 2-3 poems a day. This time, they were always about my life, about my experiences. My subconscious had been hard at work, injecting storytelling into my poetry style.

I wrote each poem as it came to me, as I was dealing with the memory or the emotions attached to it. I wrote them for myself, and the process felt very random. It took a few months and a couple of conversations with supportive friends before I came around to the idea of putting them into books.

Each poem stands on its own, and most of them tell a short story from my life. So I decided to put them in chronological order and separate them into books through some kind of theme. Song of the Leviathan is the story of my heart. The follow up, The Opera of Peace, is a story about family. And the third book, Composing Ripples, is a story about friendships. Each book is a collection of poems that together hold a loose narrative. Stories within a story. And the series, Flowing in the Trenches, is a trilogy about survival and finding where I belong.

So, when you see my book links floating around on social media, test those waters. There's more there than a random collection of abstract musings. There's more to my life than what you see on the surface, and my hope is, you'll find a rhythm that will help you keep swimming.

And for the love of God, if anyone tells you to only listen to them because no one else will be honest with you, please see that for the giant red flag it is and stop listening to them altogether.