Review: We Ride the Storm by Devin Madson 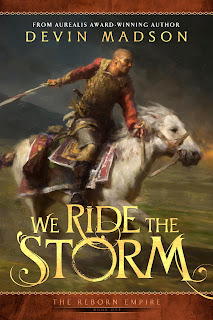 War built the Kisian Empire and war will tear it down. And as an empire falls, three warriors rise.

Caught in a foreign war, Captain Rah e’Torin and his exiled warriors will have to fight or die. Their honour code is all they have left until orders from within stress them to breaking point, and the very bonds that hold them together will be ripped apart.

Cassandra wants the voice in her head to go away. Willing to do anything for peace, the ageing whore takes an assassination contract that promises answers, only the true price may be everyone and everything she knows.

A prisoner in her own castle, Princess Miko doesn’t dream of freedom but of the power to fight for her empire. As the daughter of a traitor the path to redemption could as easily tear it, and her family, asunder.

As an empire dies they will have to ride the storm or drown in its blood.

This is a rich, Asian-inspired story of a brewing political conflict and three cultures that are drawn into it. Beautiful, savage, and inspiring in equal parts, this book is masterfully done.

There are three point of view characters, and each is written in first person. This would definitely be a writing challenge, and Madson handles it well. The characterization is excellent and the storylines different enough that transitioning between characters is always smooth.

Rah is the leader of a nomadic horse tribe that gets forced into a war, enslaved to reinforce the army of a nation they've formerly been hostile with. He struggles with his personal sense of honor and his culture's sense of duty. He must follow the commands of his superior even though he doesn't understand or agree. His self-righteous nature got his tribe exiled from their homeland temporarily, and that was only the beginning of his plight.

Cassandra is an assassin who gets close to her targets most often in the guise of a whore. She's also sharing her conscious mind with another entity, who we don't find out much about but who always seems to object to Cassandra's way of doing things. She's an intriguing character. Her plans often get sidetracked and she has to improvise quite a bit. From a first-impression standpoint, Cassandra was my favorite POV character, but my favorite story arc overall is Miko.

Miko is a princess in a society ruled by men. Her twin brother is heir to the throne, but her only chance at power is a strong political marriage. Despite her weapons training and education, it looks as though she won't have much opportunity to lead. But when her betrothed becomes an assassination target, her entire future is thrown into upheaval. Through sacrifice and determination, she must do what is best for her country, and her fortitude pushes her to action that defies all tradition. Miko is a dynamic character and watching her develop is thrilling.

We Ride the Storm finished second in SPFBO4, and it's well-deserved. A breathtaking start to what will surely be an exciting series. Congrats to the author and thank you for a fantastic tale!