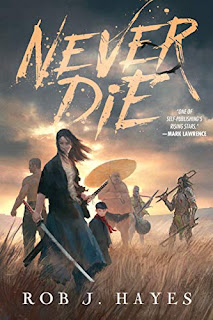 Ein is on a mission from God. A God of Death.
Time is up for the Emperor of Ten Kings and it falls to a murdered eight year old boy to render the judgement of a God. Ein knows he can't do it alone, but the empire is rife with heroes. The only problem; in order to serve, they must first die.

Ein has four legendary heroes in mind, names from story books read to him by his father. Now he must find them and kill them, so he can bring them back to fight the Reaper's war.

Ein is a small boy who has been given a mission to kill the Emperor of Ten Kings. He's granted a mystical power to resurrect fallen heroes and tie them to him so they must help. We follow their journey across the empire Hosa as Ein finds legendary heroes and builds an army.

Traversing this land includes combatting Asian-inspired fantasy creatures, as they have to fight the minions of warring gods and confront an opposing army that is also vying against the emperor.

Will they fall before even reaching their goal? Will they learn to work together? Will they find enough courage within them?

Their journey is not an easy one. They must face successes and failures, and examine who they were in their previous lives and what it takes to keep them focused on this mission. Because of Ein's special ability, they don't have much of a choice of whether to follow him, but their path lends itself to a lot of reflection and challenges each of them to dig deep enough to find the resolve it will take to stand up against the emperor.

I recommend this to fans of dark fantasy looking for Asian-inspired lore with a mythological atmosphere, rife with battle and uncertain heroes hoping for redemption.