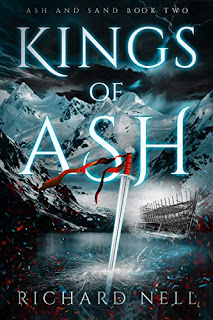 The much anticipated continuation of the Ash and Sand trilogy...

Follow the long, bloody journey of Ruka, son of Beyla through the islands of Pyu and the frozen wastes of the Ascom; see the return home of Ratama Kale Alaku, the 'Sorcerer-Prince', and the terrifying rise of his 'miracles'. Before the end, a shocking history will unravel, ancient connections unfold, and all will learn the cost of unleashing the Kings of Ash...

This sequel to Kings of Paradise picks the story up where it left off, and we’re shown more progression leading up to a tragic and inevitable war. An attack filled with political risk jeopardizes the fate of the cultures on both sides. Three compelling leaders, each empowered in ways they don’t themselves understand, are set on a collision course that terrifies fate itself.

“I am not a man, Prince of Paradise. I am a thousand years of children buried nameless in rotten earth. I am the rage of their helpless mothers, weeping beneath an empty sky. I am the bitter fruit of frozen tears.”

Much of this book shows events from years past, to give the reader an exclusive sort of insight into the lives of Ruka, Farahi, and Kale. Fans of the first book will appreciate the deft storytelling and calculated ease at which the stakes are revealed. All along we’re haunted by the mantra: It matters why.

And why indeed. Ruka fights for his people, for a future filled with warmth, peace, and bounty, for something beyond mere survival. Farahi’s goals are much the same, a unified island chain surrounded by safe seas, a future in which his family line is secure. And Kale, who has risen to every challenge, driven by his love for others, continues to ascend in the face of turmoil. The author expertly weaves through the years and drama of their lives, building to a cinematic final battle that tore me open and left me in tears.

If you’re looking for epic high fantasy that’s vivid and grand, you will cherish this series.

You can find Kings of Ash here on Amazon or here on Goodreads.