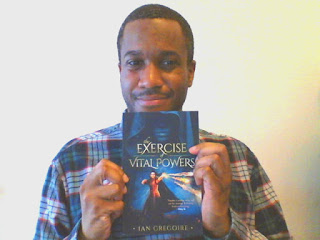 A few weeks ago, I reviewed The Exercise of Vital Powers. This book was a semi-finalist in SPFBO3. I'd heard so many great things about it, and I was not disappointed! Gregoire has created a unique and diverse world, and he was kind enough to share a bit about his creative process with us today.

What inspired your world building process?
I tend to develop the world building for a story while I am writing it. With each draft it gradually evolves, becoming more fleshed out and coherent, until I have it all set in stone when I write the third (final) draft.

Inevitably, my world building is inspired primarily by the creative works of other writers, whether those stories were told in the pages of books and comics, or via the visual medium of film and television, or in the recordings of audio dramas.

With regard to my first novel, The Exercise Of Vital Powers, the world building was influenced a great deal by the book Shadowfall by James Clemens, and to a lesser extent, the Black Magician Trilogy by Trudi Canavan.

Who are you writing for and why?
For as long as I can remember, I have always written for myself (who better to write a story I’m guaranteed to like?). So, even though I’ve known since early childhood that I wanted to be an author, it wasn’t until the last four years or so that I actually started writing with the intention of having my stories read by persons other than myself. But I remain the primary audience for my stories, if other people enjoy them I consider it a bonus.

As for why I write: I guess it’s in my nature to be a storyteller. Since I was a young child I’ve had a very active imagination, and been prone to daydreaming about the make-believe. I think that’s the only way to make sense of why I feel compelled to write the stories constantly playing out in my mind.

What do you do to recharge your creative energy?
I like diversions that will boost my creativity by happenstance. So when I need to take a break from writing I enjoy reading, listening to music, and when time allows, watching films, bingeing TV series, or playing games; all these things invariably contribute to my creative output.

Sometimes, I also like going for long walks just to clear my head.

Ultimately, I hope that my work will kindle an appreciation for storytelling that will inspire future storytellers to want to write and share their own stories, in much the same way that the writing of C.S. Lewis inspired me when I was a child.

Where is your writing taking you?
Hopefully to a bank balance that will make J.K. Rowling envious. If that isn’t a realistic prospect, I would like to reach the point where I earn enough money from my writing to allow me to write full-time. I have many unfinished stories to complete, and even more yet to be started ideas to begin writing.


Here's where you can find Ian Gregoire online: