Review: The Exercise of Vital Powers by Ian Gregoire 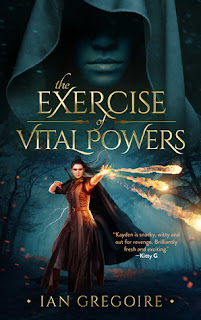 Some Lessons Must Be Learned The Hard Way

Since its inception, The Order has been dedicated to the prevention of the misuse and abuse of magic. For seven decades this mandate has guaranteed peace and stability throughout The Nine Kingdoms. But a potential threat to the peace has emerged, and its source is much closer to home than the leadership of The Order may realise.

Arrogant, manipulative, confrontational and angry. Undesirable qualities in a person at the best of times, but more so in a young woman born with the power to bring kingdoms to their knees. Kayden Jayta, precocious apprentice of The Order, is all these things and more, yet wholly unwilling to acknowledge and rectify her many troubling traits.

Unbeknown to anyone, Kayden’s resolute determination to join the ranks of The Order is born of a secret that puts her priorities at odds with the precepts of the organisation, setting her inexorably on a collision course with the most powerful institution in The Nine Kingdoms.

If Kayden is to be dissuaded from walking the path she has chosen, averting tragic consequences in the process, two unanswered questions must be answered: What is the dark secret guiding Kayden’s actions? And, why has a legendary figure within The Order, with a secret of her own, taken undue interest in Kayden’s future?

An enthralling journey of inner discovery, I found this to be an enjoyable book, entertaining and richly developed. This world has three different kinds of magical energy, each accessible in discrete ways. The Order teaches only one of the three types of magic, and we follow a critical time in the life of one of its students.

The main point of view character is a young woman, Kayden Jayta, who is studying to be inducted into The Order. These studies take 10 years, but Kayden is advancing faster than anyone, and has earned the attention of Fay Annis, the campus administrator, though not necessarily in a good way. When Kayden completes a task no student has succeeded at before, Annis must act on her suspicions and bring Kayden to meet her superior.

The school is more like a college, so don't go in expecting Harry Potter. These are older students and their interactions reflect such. Kayden's accelerated advancement is a source for much rumor and speculation, and she has trouble getting along with just about everyone on campus. She's quite arrogant about her skills and talent. In the opening chapters of the book, she's so conceited it's hard to relate to her. She treats everyone with derision and rebuffs any attempts at friendship.

Fay Annis is also a point of view character, and through her chapters we see some of her concerns and intentions in her plans for Kayden. At times such insight is a relief, at other times it brings ominous foreshadowing.

The further you read, the more you learn about Kayden and why she acts the way she does. These revelations give her character much more depth.

The world has many different countries and complex political history, which is detailed through instructional conversations. I appreciated some amount of it, but at times I didn't see how it pertained to the story. While it does add to the academic tone, I hope some of those politics and conflicts will tie in to future books.

Once the main conflicts are over, there's a fairly long wind-down period before the book concludes. This would definitely suit readers who want stories that don't end abruptly. I recommend it for those who enjoy stories of magic academies, practitioners, exploring emotional trauma and spiritual paths.