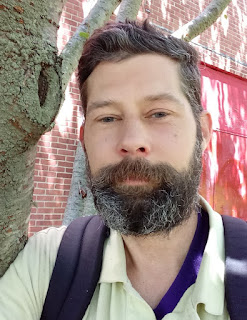 Richard Writhen has published several novellas and contributed to the dark fantasy anthology Blackest Knights (which I reviewed here). He has more story planned to fill out his world, and graciously took the time to answer a few questions here today.

What inspired your world building process?
I call it parallel world ideation. I try to utilize my observations from my time lived in many cities to create realism. Some aspects of our world are retained, some are changed to reflect the different cultures of the world of Cedron. I’ve identified a few continents, a few countries, a few cities, etc. Also, my three series (The Rotes of Rena, The Shades of Cedron, and The Celestial Ways Saga) take place in different eras, so the passage of time is involved in the differences.

Who are you writing for and why?
I am attempting to strike a chord somewhat between grimdark fantasy, cosmic horror and weird fiction. Say you were to stick two of HPL’s novellas, The Case of Charles Dexter Ward and The Dream-Quest of Unknown Kadath, into a blender, pureed them profusely and then somehow turned them into novellas, that’s the approach that I’m going for. I was highly influenced by ASOIAF as well as Lovecraft. There’s also a heavy video game influence, from franchises like Resident Evil, Mortal Kombat and Eternal Darkness, which is interesting. It just kind of snuck in subconsciously.

What do you do to recharge your creative energy?
I listen to a lot of heavy metal music, watch films and read other books, many of them fellow indies, to stimulate the imagination.

What reactions do you hope to inspire in others?
So far, it seems to be abhorrence. But I wish to engender wonder in the reader. Hopefully someday …
Where is your writing taking you?
That is a good question. The first two series are set to be trilogies of novellas, and then the third will now be four volumes. So, it’s a total of ten novellas, then whatever short stories I can come up with in the interims between them. The books will make more sense as more of the narrative is revealed; the first in any writer’s series kind of just sets up the action.