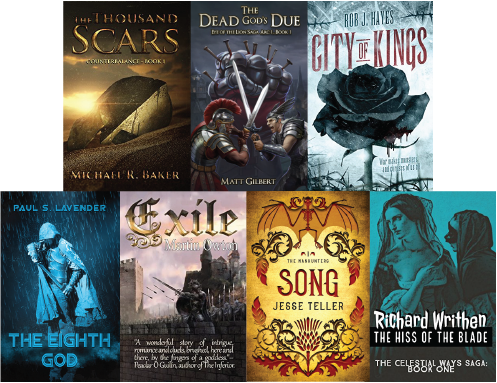 We've all heard the advice that writers should read to become better writers, but where to start? What are writers reading? I've asked a few indie authors what their favorites reads were this year and here's what they had to say. Many thanks to these fine authors for sharing their recommendations:

Best: For me it is a tie between Richard Nell's Kings of Paradise and Straight Outta Fangton by Charles Phipps —Michael R. Baker, author of The Thousand Scars

I only read three books this year, and really enjoyed all of them: CT Phipps's I was a Teenage Weredeer, ML Spencer's Darkmage, and Rob Hayes's Where Loyalties Lie. Still hoping to finish AM Justice's A Wizard's Forge over the holidays. —Matt Gilbert, author of The Dead God's Due

I dove into an anthology of Penny Dreadfuls this year with classics like Diary of a Madman and Sawney Beane. I love this kind of work because of the different flavors of diction that they provide. Read some Charles Phipps. The stuff I got ahold of for him was a kind of slapstick horror mixed with blood-pumping action. That is not a super accurate description but for the last few months I have been trying to categorize his work unsuccessfully. This is the best I can do right now. I read Bone by Jeff Smith this year, if you haven't, you should. And look for ML Spencer she is a woman in fire. —Jesse Teller, author of Song

My favorite read this year was definitely Darkmage by M.L. Spencer, though I really enjoyed Fae: The Wild Hunt by Graham Austin-King, American Psycho by Bret Easton Ellis, I Was a Teenage Weredeer by Charles Phipps, and a re-read of Firestarter by Stephen King. —Richard Writhen, author of Hiss of the Blade