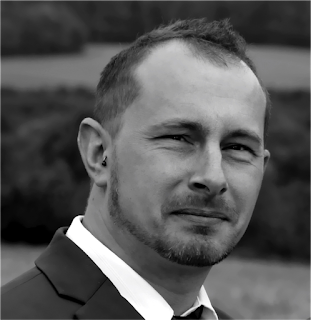 Last month I reviewed The Blighted City, a semi-finalist in SPFBO4, and author Scott Kaelen shared with us the cover design process for this debut novel. Today I'm pleased to bring you an interview with him, to delve a bit deeper into his creativity and writing techniques.

What inspired your world building process?
I started with the geography of an entire continent, but allowing for changes as stories evolved. I sketched a map of the continent of Sosarra, added mountain ranges, lakes, a land-locked sea, forests, and various types of coastal area. I then placed cities in the sorts of places they were most likely to be, based on the growth and the flow of society over the ages. This gave me a template to work with. I broke the continent into lands based on topographical boundaries, named each area, each mountain range, city, etc., and figured out what sort of society would exist in each one. Some, like Midhallow, were given a solid history, and the continent in general was painted with a shared history that affected all of the lands, i.e. in Western Sosarra, the land of Vorinsia conquered its neighbors to the south – Sardaya and Khalevali, and merged the three together to form the Vorinsian Arkh. Some of this was peripherally mentioned in The Blighted City, but will be made much more tangible in the next novel because the action will spread from Himaera (the land in which all of The Blighted City takes place) across into the continental mainland to Vorinsia. The snowy northern land of Thylea is where a new main character will begin, and the city of Midhallow will also be visited and play an important role. All of this really only touches the surface of the world-building that’s grown over the last several years for the world of Verragos, and I would say that the sheer depth of world-building done by authors such as Tolkien, Feist, Weis & Hickman, and many other excellent epic fantasy writers, is what inspired me the most in my world-building process. Creating a world gives you a pseudo-god-like power, and, what started off as an unnamed island grew into a richly-detailed world which I fell in love with and am looking forward to sharing more of with readers in future books of the Fractured Tapestry series.

Who are you writing for and why?
I suppose I’m writing primarily for myself, but I’d be lying if I said that I don’t care what my readers think; of course I do. Any constructive criticism which The Blighted City may receive (it is a debut novel, after all) will be considered during the creation of the next novel, and so on. Sales do matter, and receiving book reviews is also a huge deal and far from easy to obtain from readers. The bottom line, I suppose, is that I’m writing to release the stories inside me which need to come out, and for as many fantasy lovers as I could possibly hope to turn into fans. I’m acutely aware that we can’t please everyone, so I suppose the No.1 person who benefits from my writing is me. It’s a catharsis. And why let such a rich world like Verragos go to waste?

What do you do to recharge your creative energy?
If I get stuck in a creative rut, I try to pay more attention to the things that are most likely to inspire me. The real world is a good start, but also other authors’ writing styles, movies, TV shows, computer games. The dialogue in the best-written TV shows is often more of an influence than the dialogue in books. In the dialogue I write, I try to find a sweet spot between “real” conversation and the “polished” version of organic flow that the superior TV shows and movies are capable of. When I lived in Germany, I used to go for walks alone in the nearby countryside and just let my mind wander through scenes that weren’t yet written, and often I’d return home and thrash out some good work, my creative energy refilled. Where I currently live though, that’s not much of an option, so instead I just go for a lie down, close my eyes and let the characters play out their conversations in my head. It does work, and some nights it even stops me from getting to sleep.

What reactions do you hope to inspire in others?
All of the good reactions! I want readers to be excited, invested, and eager to keep reading. I want their heartstrings to be twanged at the right moments. I want them to feel a real sense of wonder, immersion, and all emotions ranging from laughter to tears, from comfort to dread. I want to hear readers say that their experience was a wonderful ride and that they’re eager to read more. Ah… and I’d also like them to review what they’ve read – it doesn’t help if you only tell an author that their book is great; don’t keep it private, make it public and tell the world by writing a review on Amazon and Goodreads. If you’re not confident with writing a review, just keep it simple. “I loved this book,” is about as simple as you can get, but that, plus the star rating, is MUCH better than not doing so at all.

Where is your writing taking you?
I’m currently working on the second novel in the Fractured Tapestry series. Oriken, one of the main characters from The Blighted City, will return, but this time he’ll be going much further. This novel is not a direct sequel to The Blighted City; my plans are for it to be the first of a sub-series (which may only contain two novels, maybe more). I’ll be unlocking much more of the world and taking the adventures to new lands, some of which were mentioned or hinted at in The Blighted City. Essentially, my aim is to blow The Blighted City out of the water with “Book Two”, and I’m excited to be writing it. This is a story I wanted to write several years ago but which I lacked the skill to create. Now, with more “Author XP” under my belt, I’m confident that Book Two will give me an “Author Level-Up!” Stay tuned.