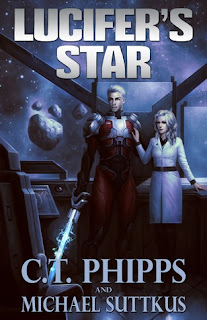 Cassius Mass was the greatest star pilot of the Crius Archduchy. He fought fiercely for his cause, only to watch his nation fall to the Interstellar Commonwealth. It was only after that he realized the side he'd been fighting for was the wrong one. Now a semi-functional navigator on an interstellar freight hauler, he tries to hide who he was and escape his past. Unfortunately, some things refuse to stay buried and he ends up conscripted by the very people who destroyed his homeland.

LUCIFER'S STAR is the first novel of the Lucifer's Star series, a dark science fiction space opera set in a world of aliens, war, politics, and slavery.

Cassius Mass was a starfighter pilot from a planet ruled by space nobility. Despite his wealth and war medals, his side lost the war and he lost everything he thought he cared about.

The story begins about five years later. Cassius has been drinking away his pain and sleeping around with the crew on a ship filled with mercenaries who are also hiding from their pasts. It's the perfect place for him to wallow in sarcasm and memory suppressants, until he finds out there's much more to his crew than it seemed.

Cassius clearly used to be a bad guy, living in denial about some of the vile practices his ruling class had dealings in, and he certainly displays a "flexible" morality. In this story, though, he's finding reasons to reform as he learns to care about the experiences and struggles others have had to face. He's honorable enough to root for and devious enough to be likable.

The writing style is light-hearted and entertaining, but lacks a level of polish I've seen in the author's more recent work. Still, it definitely includes Phipps's signature blend of intrigue, sass, and fantastical effects.

I loved the plot, plenty of unexpected turns that challenged the characters and left me wondering how it would all play out. The relationships Cassius has with various crew members and other characters had a wonderful realism to them.

If you're looking for sci-fi that's fun and unpredictable, with great dialogue and action scenes, definitely check this one out!