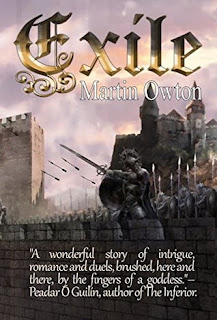 Aron of Darien, raised in exile after his homeland is conquered by a treacherous warlord, makes his way in the world on the strength of his wits and skill with a sword. Both are sorely tested when he is impressed into the service of the Earl of Nandor to rescue his heir from captivity in the fortress of Sarazan. The rescue goes awry. Aron and his companions are betrayed and must flee for their lives. Pursued by steel and magic, they find new friends and old enemies on the road that leads, after many turns, to the city of the High King. There Aron must face his father’s murderer before risking everything in a fight to the death with the deadliest swordsman in the kingdom.

Aron of Darien kills a notable swordsman in a bar brawl, and then has to serve the Earl of Nandor to make up for it. Nandor is out in the sticks or something because they don't have a lot of great heroes or money. They do have daughters who are both very attracted to Aron. You get the idea they don't have a lot of visitors coming through, and you see their different personalities through their advances. Aron is a very talented swordsman and these ladies are both very eligible. It sets up a love triangle that, being sisters, definitely brings tension and stress to Aron. Not to mention, their mother's not been satisfied with the Earl in awhile, so she's making eyes at Aron, too.

Just when things are heating up, Aron has to leave Nandor. The Earl sends him to rescue a kidnapped nobleman (the Earl's son) and the adventure really begins there. They send a small party to help, which leads to more complications than Aron bargained for.

It's a fairly classic style of fantasy, although Aron is not your classic fantasy hero. He seems humble and uncertain about his direction in an endearing way, with a pessimistic and sometimes humorous outlook. Rather than charming the ladies with confidence, he's indecisive and overwhelmed with the romantic attention he receives. As far as his ego is concerned, he is willing to do anything to achieve his objectives, including cross-dressing. The hair and makeup scene was delightful.

The setting feels like medieval Europe, but has some unique religions and customs to give it its own sort of flair. The ending did not wrap everything up as smoothly as I'd hoped, but it is book one of a series, so I'm sure the author desired to leave some questions open.

I recommend this story for readers who enjoy classic medieval European fantasy with risky adventures and complicated romances.