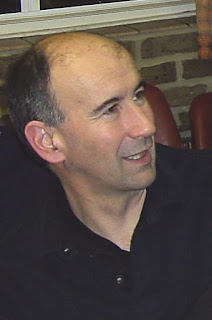 After my recent review of Exile by Martin Owton, I reached out to the author and he was kind enough to agree to an interview. Many thanks to Mr. Owton for sharing a bit about his methods, and if you haven't read one of his books yet, I recommend it!

The towns and countryside around me here in England plus the books I've read.  I went to a school that was founded in the 14th century and still uses some of the original buildings. Likewise with where I went to university. Nandor town is slightly based on Machynlleth in mid-Wales which I've visited several times. The Holy City is somewhat based on Verona.

I wanted the settings to feel reasonably familiar to a fantasy reader so that they could focus on the story and characters rather than have to assimilate a new world where they don't know how it works.

Primarily myself, though with Exile I was fortunate to acquire a couple of muses who read the chapters as they were produced and would nag me to write quicker. It was also great to be able to kick ideas around with them about what should happen next. There are a couple of chapters that would not have happened without their direct input.

I would hope that Exile would suit the readers of the big well-known fantasy series, maybe to read while they are waiting for The Winds of Winter. Exile was deliberately written to be non-epic – if the bad guys win winter is not coming – which has nor served me well in the recent fantasy marketplace. A number of reviewers have drawn comparison to the works of David Gemmell - flattering to be sure and I certainly am influenced by his books, particularly the Drenai series - so any Gemmell readers would probably like Exile.

I used to play a lot of competitive sport but unfortunately those days are past. I can no longer listen to music so these days I cook.

Pleasure. The best words an author can hear are “I loved your book”.

Into book stores, I hope (and to WorldCon in Dublin next year). I'm close to retiring and becoming a full-time writer though I doubt my output will increase greatly. Time to write is not the problem, microplotting – what happens in detail on the next 2 pages – is what takes me the time. I have a contemporary fantasy coming out sometime with Crossroad Press, and I'm getting close to finishing a new book (not a Nandor Tale). I hope this time my agent will be able to find a home for it.