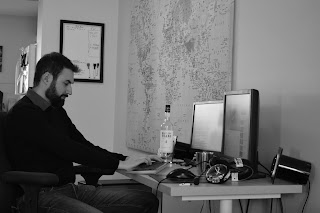 I recently reviewed Richard Nell's epic novel Kings of Paradise and easily became immersed in the scope of his world. Lucky for me, he was kind enough to answer a few questions about his work.

The short answer is a love of history. Kings of Paradise has a world very much like our own, in a style we tend to call ‘low fantasy’ these days. The two main cultures shown are bits and pieces of different real cultures mushed together with a little spin. The Ascom, for example, or the ‘land of ash’, is pulled right out of an old Norse self-description: ‘Ascomanni’, or ‘men of the ash tree’. They meant Yggdrasil, the tree they believed held the worlds (this is also where ‘Middle Earth comes from, or Middenheim), and I turned the mythology into men rising from the ash of a volcano. Even some of the matriarchal aspects are pulled from a South-East Asian people that still exist today (though they are mostly Islamic now, which is rather more patriarchal!). Anyway, I could go on (and on…). It would be fair to say I enjoy the world-building process, but I try not to make it intrusive. I know not everyone is as interested as I am!

Myself, mostly. I have ideas I want to explore, things I need to get out, and the best method I’ve ever found is to write them down and pull them apart and try to understand. These days more and more I write for the wonderful fans eagerly awaiting the next book(s), but fiction has always been a way to invite others to explore these things with me. Once a reader has the book in their hands, I like to think we’re seeking answers together. I’m not a preacher. I don’t have any great truths to impart.

I work rather hard at a schedule of relaxed discipline. Writers in general tend to be lazy, sneaky gits who (if you let them), will sneak off and indulge any number of bad, self-destructive habits. So I try to keep my mind and body healthy. I exercise, eat relatively right, and allow time to screw around and do nothing. I read a lot, too.

Thought, emotion. I’ve never really been the type to just ‘entertain’, though of course that is and must always be part of the experience. I suppose I’m happiest when I hear a reader is consumed, glued to the writing until they’re finished, and affected long after. I know what it’s like to have a book change you, and whether or not I can pull it off, that is what I want for anyone.

Hopefully to a better version of myself. Writing I think is the most authentic thing I can do with my energy, so there’s a certain freedom or at least peace in that. If I die tomorrow, I did what I could. And if I’m very lucky perhaps it will even earn me a living. But we’ll see.


For more of Richard Nell's work: