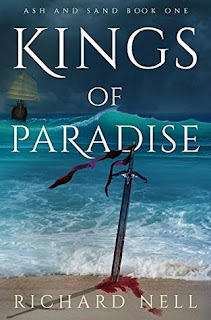 An island prince searches for meaning; a deformed genius struggles to survive. In a changing world where ash meets paradise, only one man can be king…

Ruka, son of Beyla, is a monster. Single-born, twisted, and ugly, Ruka has the bright, golden eyes of a wolf, but his mind is as vast as the open sky.

Born in the frozen, snow-covered wasteland of the Ascom—the land of ash—Ruka was spared from death at birth by his mother’s love. Now, he is an outlaw, and dreams only of vengeance. But can a broken genius find redemption? Or once he has the world in his grasp, will he simply break it apart?

Across a wide sea is the white-sand island paradise of Sri Kon.

Ratama Kale Alaku is fourth and youngest son of the island monarch men call the Sorcerer King. And at sixteen, Kale is a disappointment. His father has sent him away to the navy, perhaps in hopes of salvaging a once-promising child, or perhaps just to get rid of him.

Now Kale must prove his worth - and not just to his father. He must become more than a wastrel prince, or else lose all hope of purpose, or love.

And though Kale does not yet know how or why, he stands on the cusp of discovery. For his path, his 'Way', is perhaps the only hope for his family, his people, and as the storm gathers across an unknown sea, maybe the world itself...

Vast in scope and intimate in its telling, Kings of Paradise is an impressive novel from a brilliant mind.

The story unfolds naturally and starts with humble beginnings. Ruka, an only child raised by a single mother, and Kale, fourth son of an island king, and not very skilled at anything.

In the land of Ash, Ruka is an exile who longs to expose the corruption of the religious order and claim some personal justice for crimes against his mother. These are tribal people whose governing system is centered around women and their hierarchy of priestesses. They are isolated from other cultures and have an ancient lineage of gods and legends. Ruka is unique for his knowledge of runes, which his mother taught him though most of his people no longer understand, especially not men.

In a distant but no less unique culture, we follow the life of Kale, a young prince who goes through many different types of studies and training trying to find his purpose, where he can best serve and what his contribution to the world should be. He learns some rare and powerful metaphysical skills that earn him a few followers and a few enemies.

The most impressive aspect of the book is how the complexity of the cultures, politics and religions become increasingly revealed as the characters mature and are themselves gaining more perspective. The world building is so intricate and so expertly shown, only as details pertain to the story at hand. There are many point-of-view characters whose lives contribute to the story in different ways, sometimes only for a chapter or two.

My only critique is that the distribution of point-of-view changes is somewhat irregular, at times spending several chapters with one character before switching to another. It only mildly affected my reading pleasure as I sometimes took a few pages to remember who the next character was and what he or she had going on, at least in the early stages of the story.

This book is so engaging. It was incredibly hard to put down. The characters have much at stake, and their personalities are inspiring and demanding.

I highly recommend Kings of Paradise for readers of epic fantasy who are looking for something impressive, unique, authentic and complex.