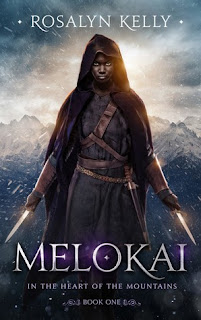 Legendary warrior Ramya has successfully ruled as Melokai for longer than most. Prosperous, peaceful, and happy, her people love her. Or so she thinks.

Ramya’s time is up. Bracing herself for the gruesome sentence imposed on all Melokais who have served their purpose, she hears instead a shocking prophecy.

Is the abrupt appearance of a mysterious, eastern cave creature the prophesied danger? Or is it something darker, more evil? And what of the wolves? Will the ferocious war with their kind oust her from power?

Suddenly Ramya must fight threats from all sides to save her mountain realm. But while her back is turned, a conspiracy within her inner circle is festering. Ramya and her female warriors must crush an epic rebellion before it can destroy her and devastate her beloved nation.

She thinks it’s the end, but it’s just the beginning...

Melokai introduces us to a brutal world of tribal nations with unique races and strange customs. The Melokai is the ruler of the Peqkya society. Their tendencies are very bestial, although their appearance is human. It's a misandrous society, where men are second-class citizens and vulnerable to extreme punishments for slight mistakes. Cats are a big part of their lives, including cats that can speak. The Peqkya culture is very detailed, complex, and violent. It's an excellent display of a culture that combines human instincts, rash consequences, and animalistic survival traits.

This is a violent world, even in sexual arenas. To me it felt like an indication of the state of the societies, or the shortness of tempers, rather than being gratuitous.

The different races in this world are humanoid-animal blends, some leaning more toward humans and others leaning more toward the animal. The wolf tribes operate much like wolves, living in small packs with an alpha male and female. They are territorial and very protective of their land and their pack members. Beyond that, we don't see much detail about their customs and traditions, which lent to an off-balanced feeling.

And that's really my only criticism of this work, it lacks a consistency of richness. The Peqkya culture comes alive, while some of the other cultures feel a bit flat or seem to be based mostly on stereotypes. So, there's a kind of unevenness in the immersion.

There's a desert society based around camels, which has it's own religion and conniving royal politics. There's a distant tribe of pygmies. And one society is a kingdom of humans, complete with king & queen, knights and princesses.

There are a lot of POV characters and a few plotlines left open. Only one climax really comes to fruition in this book, which leaves the author several threads to develop further in the series, and left this reader really wishing to see more of where things are going.

I absolutely loved Melokai Ramya. I can understand there's some debate about whether she brings on herself the plots that scheme against her, but I thought she was a very relatable character who wants the best for her people.

I very much enjoyed Rosalyn Kelly's writing style and look forward to the sequel!

You can find Melokai here on Amazon or here on Goodreads.