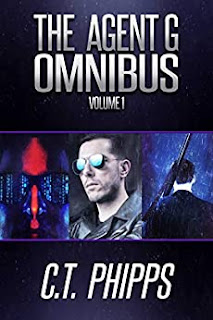 C.T. Phipps is a lifelong student of horror, science fiction, and fantasy. An avid tabletop gamer, he discovered this passion led him to write and turned him into a lifelong geek.

How has your writing process evolved over the years?

It has benefited tremendously from practice, practice, practice. I have learned to recognize a lot of my weaknesses and work to compensate for them. I also have managed to really make a bunch of little 'rules' for myself that help me understand what I want from chapters, book size, and plotting. I've also become much better at self-editing.

Really, though, the fundamentals of telling the stories I want to write have remained. At the end of the day, while your craft improves, the heart of an author is that they have a story they want to tell. There's still many stories I want to tell about my casts of characters and I probably could spend the rest of my life writing books about the ones I've created so far alone.

You have a lot of series under your belt. How do you decide what to write next?

My secret is that I follow my inspiration. The best advice I can give an author is that they should write what they feel like writing and worry about what will sell or finishing their existing projects later. Mind you, that resulted in me starting perhaps more series than is healthy to create. However, it has made the process a lot easier than if I was trying to force it. I write what I would like to read myself.

My most recent release is a bit of a cheat in its the collected omnibus edition of my AGENT G novels with an additional short story.

The Agent G series is about the titular character who is an assassin working for the International Refugee Society (which doesn't do anything for refugees). His memory was wiped and he was cybernetically enhanced by his employers but G supposedly will regain his past if he serves them for ten years. Our (anti)hero doesn't believe they'll honor this deal, though. It follows his attempts to get out from under their thumb as well as how the world changes from one similar to ours to a cyberpunk dystopia. Really, I think the trilogy of novels (Infiltrator, Saboteur, and Assassin) work better as one big novel than three individual short ones.

What does a typical work day look like for you?

Eat. Sleep. Play with Dogs. Write. Repeat. Haha. No, that's not entirely accurate. My work day is nothing special, though. I just sit down at my desk and try to write what I can. Sometimes it works, sometimes it doesn't. The success is not important, though, so much as making time. As long as you have a quiet space to work out your thoughts then you have a chance to get at least a little out onto the screen. One of the handiest tools I got during my early writing days was Nanowrite that explained, roughly, you didn't have to write a lot. You just had to write consistently and I think that's a basic habit every writer should pick up.

Tell me about one or two of your favorite characters you created.

I'm a huge fan of Agent G and he's one of my characters that has undergone the biggest arcs from where he originally began. The character began as a cold, almost psychotic assassin who was quite content with his life of murder as well as riches. Watching him deal with developing empathy for his targets as well as discovering his origins was an interesting trip. It's not so much that G becomes a better person, though he does (a little), but that the rest of the world becomes so much worse and our protagonist has a few lines he won't cross.

Another character I'm very fond of from the same series is Marissa Sanchez. I don't want to spoil much of her but G's hacker friend is ten different layers of secrets.

For a first-time reader interested in your books, where would you recommend they start and why?

I'm currently having a sale on the first novel, Infiltrator.

If you're not sure about the AGENT G omnibus, certainly you can try the first book out for yourself. I also think the audiobook version, as narrated by Jeffrey Kafer, is extremely good.

If you have interests other than sci-fi and enjoy a good laugh, I also recommend my Supervillainy Saga series that opens with the Rules of Supervillainy (also on sale).

That follows Gary Karkofsky a.k.a Merciless: The Supervillain without MercyTM. A ordinary guy who finds a magic cloak in a superhero filled world and decides that it means great power as well as great irresponsibility. But is he evil enough to be a true villain?