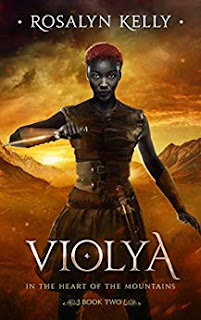 A gifted warrior consumed by revenge. An unstoppable enemy rampaging ever closer. A ravaged country in desperate need of a ruler.

After a brutal and bloody invasion, a once powerful matriarchal nation is in chaos. Only the shy warrior Violya can pick up the pieces and save her broken country. But an old threat – for one thousand years suppressed – has awoken. Now unleashed, it’s hell-bent on destruction. To protect her people, Violya must cast aside her desire for vengeance, master her rare magic and find the courage to rule – and fast.

Time is running out as a prophecy is coming true. A formidable enemy is closing in to crush them all. Can Violya unite friend and foe to face the looming catastrophe before it’s too late?

She’s out for blood, but first she must master her own…


This is book two, the follow up to Melokai. I very much enjoyed the world Melokai introduced us to, and have been eagerly awaiting the sequel. This book did not disappoint.

Where the first book spent more time introducing us to the world and the cultures, this one picks up where it left off and focuses much more on characters. Most of the point of view characters from book one continue here, with the exception of course of any who did not survive book one. No spoilers.

The character development is more evenly distributed in this book, and we get to see more from cultures that were briefly shown in book one. There are cave people who are nearing extinction and their culture has devolved into mostly solely about mating in hopes of having more female offspring. We delve into their cave society in this book and learn more about their struggles.

We also find out more about the special wolf Sarrya, the first female wolf who is able to stand on two legs. She is also gifted with some magical abilities and has become an influential force.

The biggest transformation comes from the title character, Violya, who takes over leadership of the Peqkya nation and makes major changes. Many of the different cultures are making major changes, the wolves, the camel people, even the human kingdom is filled with uprising and revolution. All have themes of restoring balance, fairness, equality, and the uproar such major reform can bring.

This is a dark book and the villains do horrendous things, but the protagonists mostly are self-aware people who want to bring about change and make their societies better for everyone. In that way, this book has much more hope in it than book one.

Alliances are built, broken, and reformed as the cultures regroup and prepare to face a new enemy that is set to be the main conflict of book three.

I very much enjoyed this book and look forward to the next. This is a unique series. I've never read anything like it, and so far it's only getting better.