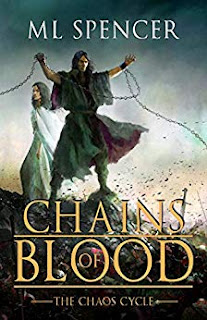 He thought he was born Rylan Marshall…until he found out he wasn’t. He was born the son of a demon. Does that mean he is destined to follow in his father’s footsteps?

Rylan was attacked, his young son murdered, his baby daughter taken. But his assailant left him with two gifts: the gift of magic…and an oath to darkness. Rylan blamed himself, even though he knew it wasn’t his fault.

The life he knew was over. And war is coming. A new enemy, stronger and more fearsome than any other, appears out of the night. Will Rylan use his newfound power to make a stand? Will he learn its use in time to make a difference? Or will his oath to darkness guide him to the enemy?

A strong tale and a great start to this new series from M.L. Spencer, who has become one of my favorite authors. I think my enjoyment was enhanced by having read the author's previous series, but it's not entirely necessary if you haven't read that and want to start here. In this new series, The Chaos Cycle, we move forward in time to follow a generation after The Rhenwars Saga. I don't want to mention anything that would spoil that series, but there is a welcoming blend of new and familiar characters to root the reader in Spencer's world and facilitate its expanding horizons.

A new war is coming, and those who clashed against each other in the Rhen find themselves becoming allies now. The invading army has inexplicable powers and seemingly unlimited resources. Grown children of sworn enemies must learn to work together and defend their homeland or succumb to this new threat.

Rylan Marshall has an intense inner struggle. When he finds out his real father is someone he always perceived as a horrible traitor, his desire to know who he is and where he came from is at odds with his sense of honor and his understanding of good and evil. While condemning his father for choices he made, Rylan himself is forced into tough choices he's unsure how to justify.

The invading army has a hive mind, and it gives them the ability to compound magical potential among their mages. This makes them horrifically powerful, and hungry to take in more mages. Mages are kidnapped, then mysteriously flipped to battle against their former allies. It's the greatest tool the enemies have and our protagonists struggle through the whole book in search of how to combat this capability. All magic wielders are targeted, which is a terrible threat to the growing order of the Lyceum.

The author expands the world and increases the stakes. Everything is bigger here, the lands, the cities, the size of the armies. The magic is more powerful and the history goes deeper, all with Spencer's signature heart-wrenching heroics.