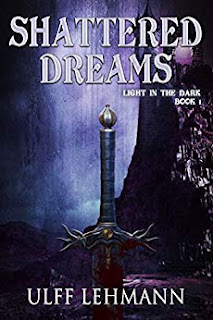 Epic Fantasy filled to the brim with Grimdark Reality

If one looks too long into the abyss, the abyss looks back. Drangar Ralgon has been avoiding the abyss's gaze for far too long and now he turns to face it.

For a hundred years the young kingdom of Danastaer has thrived in peace. Now their northern neighbor, mighty Chanastardh, has begun a cunning invasion.

Thrust into events far beyond his control, the mercenary Drangar Ralgon flees his solitary life as a shepherd to evade the coming war and take responsibility for his crimes.

As ancient forces reach forth to shape the world once more, the sorceress Ealisaid wakes from a century of hibernation only to realize the Dunthiochagh she knew is no more. Magic, believed long gone, returns, and with it comes an elven wizard sent to recover a dangerous secret.

Shattered Dreams covers the build up and invasion of a major battle, and definitely has the sense there is more to come. It's the first book of an epic war series and is truly just the beginning.

Drangar Ralgon has been living in misery, ignoring his past. He finally decides to return home to face the violence he took part in two years prior. His journey is full of challenges and enemies. His story is the one on the most personal level, as we see his remorse and struggle to seek the truth of who he is and what he's done.

Most of the other point of view characters center around two sides of a brewing war. There are a few scenes in court discussing the politics of the realm, and we get to know the dynamics of the officers and nobles on both sides of the conflict.

There's a lot of history and religion in the world building. One point of view character is an elf whose people had left the region thousands of years ago. He's returning to collect a missing tome in hopes of protecting what secrets it holds. Another point of view character is a wizardess who has been in a hibernation of sorts for generations. She's highly unusual. By this point in time, there aren't any human wizards, so if she can get a handle on her magical powers, she can be a great advantage in the war.

There's a little bit of everything here—intrigue, battle, deceit, vengeance, love, loss, victory, magic. At times I felt the pacing was slow and had a little trouble keeping up with the different characters at first. It picks up and moves the story forward while building a lot of interesting politics and backstory. I recommend this book to fans of dark fantasy, complex court politics, and epic war series.