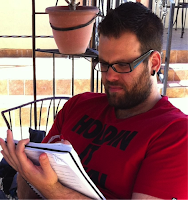 If you're not familiar with Andy Peloquin's work, check out my recent review of Traitor's Fate. He's a prolific dark fantasy author, who also co-hosts the Fantasy Fiends podcast. I'm pleased to have him here today sharing his thoughts about world building, connecting with readers, and challenging yourself.

What inspired your world building process?
I tend to approach world-building a different way every time.
Who are you writing for and why?
I write for myself, to challenge myself to see life through new eyes and to ask myself questions I would never have thought about otherwise. Every time I sit down to write a new character or story, it’s all about forcing myself to grow, evolve, and mature as both an author and a person.
Plus, I’ve loved fantasy worlds since I first found John Carter of Mars (by E.R. Burroughs) decades ago. I’ve always loved to invent and create thrilling new places and things.

What do you do to recharge your creative energy?
TV is a huge boost for me. It gives me a break to shut down my brain, but I find that it also inspires me and almost serves as education for story-structure, storytelling, and creativity overall. Books help some, but I tend to be far more critical (editor’s brain) when I read. Watching TV, it’s easier to forget about the nitty gritty and just enjoy it overall.

What reactions do you hope to inspire in others?
I want people to really stop and think about things they’d never have questioned before. We make so many instinctive assumptions and react from our gut, but we never dig deeper into the “why” of things. I want my writing to start digging deeper into themselves (and, of course, the people around them) so they can better understand their own thought processes and reactions, as well as the world at large. The more we can identify with the people around us, the harder it is to alienate them or hate them.

Where is your writing taking you?
I don’t write to win awards or to become recognized. Obviously those things would be nice—and they’d certainly help my stories spread far more effectively. However, ultimately, I write to connect with people. I want my characters to resonate with readers on a deep emotional level. I want people to think about what I’m saying and to give the arguments and rationales I’m presenting real, serious thought. If I can do that, I will count myself successful!