Review: The Fifth Empire of Man by Rob J. Hayes 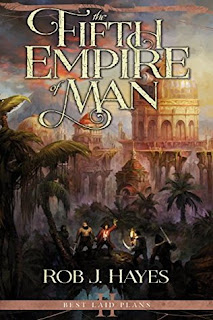 The Pirate Isles are united under Drake Morrass’ flag, but the war has only just begun. There’s still a long way to go before he’s able to call himself King.

The Five Kingdoms and Sarth have assembled a fleet of ships unlike any the world has ever seen and they intend to purge the Pirate Isles once and for all.

Meanwhile, Elaina Black is securing herself powerful allies and the forces those allies can spare. She’s set her course on the throne, either by Drake’s side or over his dead body.

Your favorite pirate captains from Where Loyalties Lie are back, as well as the vile ones you hate! Drake, Elaina, Keelin, and Tanner continue their efforts to save the Pirate Isles from obliteration.

While Drake and Tanner fortify local resources, Elaina and Keelin sail separate ways to rally allies in other regions. Things don't go quite as expected, and what's a pirate journey without a detour quest for ancient, hidden treasure?

This book was extremely difficult to put down and I often ignored sleep and other assorted responsibilities for the sake of reading further. I sunk into this sequel easily and felt fully immersed in the experience.

The final sea battle is intense, with plenty of nail-biting moments and unexpected reveals. The start of the battle loudly proclaims that no character is safe, leaving the reader on edge through the entire sequence.

I knew what I wanted for the characters and I wasn't sure if they'd be able to get there, but it ended exactly right. I'm so satisfied with everything thrown at them and how they stumbled through it. I was pleasantly surprised by how many complex threads the author resolved in this relatively short series. The story brings a wonderful sense of closure topped off with an unexpected lead into what I'm guessing is a future series to come.
If you're looking for an exciting pirate war adventure with traitors, explosions, and heart, this duology is a must!