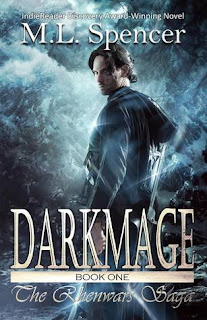 Darien Lauchlin has already lost everything. Now the only thing he has left to lose is his soul.

When his own brother unseals the Well of Tears, Darien is the last Sentinel left alive to defend his homeland. Now he is faced with an impossible decision: either watch everything he knows shatter—or forsake his oath of peace to become an instrument of pure destruction. Accompanied by Naia, a priestess of Death, Darien embarks on a harrowing journey to save the people of the Rhen. But will he lose his own soul in the process?

Darkmage starts off strong, with an intricate society and an immense level of destruction. The pacing slows down while the main characters regroup. The scope feels too broad at first. It takes awhile for all the pieces to get into position, but once they do, this book becomes nearly impossible to put down. Halfway through, I was enjoying the read, thinking, "Yes, I see why people are excited about this series." Still, I was unprepared for how excellent it would be. The intensity that commands the latter portion of the book is nearly crippling. I felt like the story took me hostage.

The Sentinels are a magical order with the purpose of preserving and protecting their homeland. When Darien becomes the last surviving Sentinel, he has to break their laws in order to fulfill their purpose during an epic war. In an effort to continue the magical legacy, he manages to find an apprentice and tries to squeeze in magic lessons amidst the growing tension of their battle plans. Darien has to make terrible decisions, over and over again. He doesn't do the honorable thing, or the ethical thing, but it's still somehow the right thing. He sacrifices so much of himself, with very little hope or indication of redemption.

The writing encompasses a careful attention to detail that speaks of the author's love of the craft. It's set in an original fantasy world with a vast history, various religions, and old adversaries. The author gives us nothing from the viewpoint of the Enemy, which adds to their ominous reputation and leaves a lot of open questions. Although the included bonus chapter from the sequel, Darklands, indicates the next book delves fully into the Enemy's side of the war. I am excited to read that, and plan to read the series prequel as well.

I recommend this book to fantasy fans who enjoy sprawling war stories with epic magic, the challenges of a new master-apprentice experience, and tragic characters with intense emotional struggles.