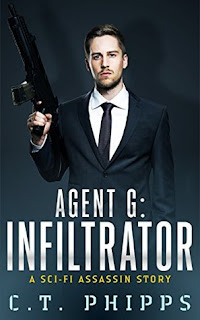 “Black Technology has made murder a billion dollar industry.”

The International Refugee Society has twenty-six cybernetically enhanced “Letters,” and for the right price, they’ll eliminate anyone. They’ve given up their families and their memories for ten years of service with the promise of a life of luxury awaiting them.

Agent G is one of these “Letters,” but clues to his past are starting to emerge while he’s on a dangerous mission to infiltrate the Society’s most dangerous competitor. In the midst of all the violence, subterfuge, and deceit, he’ll need to keep his wits about him and trust sparingly.

After all if an organization will kill for money, what would they do to keep the truth hidden?

Welcome to the future! Except it's not the future, it's now. Except the technology is so dangerous, the public doesn't know it exists. Download data files into your brain implant. Transplant human identities into super robots. Facial reconstruction is digitally enhanced with no healing time needed. For Agent G, it's all part of a typical day on the job.

Phipps does a great job of keeping the mood lighthearted. Even though the main character is a scientifically enhanced assassin, he is still relatable. The "Letters" agents have their memories swiped before entering 10 years of service, after which, they'll be reinstated to their former lives and their memories returned. Agent G seems to have a few straggling memories, though. The promise of finding out his true past is constantly driving him to fulfill his contracts. His emotional detachment from the nature of his job brings in some irony and dark humor, and occasional moments of poetic clarity.

G has to think quickly and constantly reevaluate his situation as he works through an assignment that might bring him to the truth of his past. The plot grows satisfyingly more intricate as he pushes deeper into his enemy's lair. He finds out emotions can be detrimental to a hired assassin's work. It becomes impossible to know whose motives he can depend on, whether he'll end up betrayed and imprisoned, or worse, deemed non-essential by his employers.

This story is told through a single point of view, in first-person past tense. It's a fun, quick read. I felt like it ended a little abruptly, but it is the first book of a series and I'm interested to see where this is going. It's entertaining and well worth checking out. If this sounds like it's right up your alley, there's a lot here to look forward to.