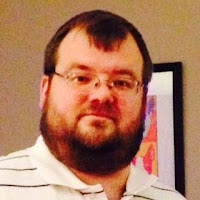 C.T. Phipps is a prolific SFF author I've had the pleasure of reading several times. You can click here to browse my reviews of some of his books. I can always count on them to be quick, entertaining reads. I'm so pleased to have him here today, sharing with us more about his work.

For me, the central thing to always remember when writing a book is to always focus on the characters and their personalities first. The rest of the world is really a backdrop for their adventures, interactions, and development. If you can get to “know” your characters really well you can write an entire book solely on their reactions to the events around them and what they choose to do next.

Who are you writing for and why?
I write primarily for myself. I want to make stories that I want to read and share my enjoyment of mixed genre combinations. I think that you should never write for markets or to try and capitalize on a craze. For me, you have to believe in what you're writing. When I wanted to create Cthulhu Armageddon, it was because I wanted to experience the wonderful post-apocalypse world of my imagination with that of one of my favorite authors.

I also got to have a little fun with the characters as my image for John Henry Booth, the protagonist, was Idris Alba. That meant a Lovecraft pastiche, which often is done in a 1920s style, starred a black man. Victor Lavelle and Matt Ruff having done the same as a critique of the original inspiration's somewhat problematic elements.

What do you do to recharge your creative energy?
I do my very best to immerse myself in the genre of the worlds I create. Stephen King had the statement that "writing is like milk, it smells like what it's kept next to in the fridge." You're always going to be influenced by what you experience. So, I find it helps to try to become as familiar as possible with vampire media when doing a vampire book, epic fantasy when doing fantasy, and so on. Sometimes, ironically, I get inspired by stuff that has little relevance to my chosen form of media. The Agent G series, for example, is a cyberpunk novel but I took heavy influence from the Bourne Identity.

What reactions do you hope to inspire in others?
I generally just hope my readers have a good time reading my stuff. Some authors want to make big statements but I generally just want to entertain my readers first and foremost. I do think every author brings a bit of their politics to their work, however. Mostly, in my case, I keep it the very simple, "Kill Nazis" and "being tolerant is good." Otherwise, I expect my readers to enjoy the books for what they are with characters having wildly different (but entertaining) views of the universe.

Indeed, one of the things I love about writing is that I can explore different viewpoints as well as have my characters make arguments against ones I might normally support. Cassius Mass in Lucifer's Star is an unrepentant feudalist turned space pirate. John Henry Booth from Cthulhu Armageddon was a fascist raised in a cult-controlled city-state but has been re-educating himself on some harsh wasteland truths. Like, say, people deserve to be free as well as not eaten by monsters.

Where is your writing taking you?
My next work will be a third novel in the Cthulhu Armageddon. I’ve also got a new book called Tales of the Al-Azif coming out. It’s a short story compilation containing works by myself, Matthew Davenport, David Hambling, David J. West, and David Niall Wilson. Folks who liked my Straight Outta Fangton novel will love that its sequel, 100 Miles and Vampin’ is also out.