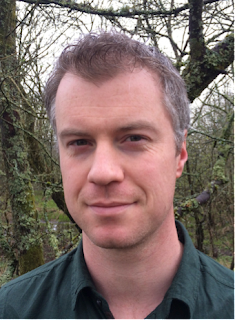 I recently reviewed They Mostly Come Out At Night by Benedict Patrick and found the atmosphere captivating. I'm pleased today to share here my interview with the author.

Folktales and fairytales have always captivated me. From an early age, I was surprised at how many different versions of traditional tales were out there. I had a storybook of Red Riding Hood were there was a (with hindsight, very disturbing) picture of the huntsman opening the sleeping wolf’s stomach, loading it with stones, and then with a flip of the page the wolf was drowning in a nearby river. My friends had not heard that version before. As I grew older, I enjoyed finding more obscure folktales – East of the Sun, West of the Moon was a favourite.

When it comes to my own worldbuilding, particularly for the Yarnsworld novels, storytelling traditions are one of the first aspects of worldbuilding that I tackle, whether it’s the warning tales of the Magpie King’s forest and the Crescent Atoll, or the hero worship that is going on in the City of Swords, the stories that the characters in my world tell each other dictate how they act, and what the world around them is like.

The correct answer here is for me, isn’t it? 😊

There’s definitely part of that, especially in the beginning, but I’ve been very lucky to develop a small but dedicated readership, who’ve stuck around through three very different books. Nothing gives me a bigger kick than hearing from those people that they enjoyed my latest story.

I like to game. I try to game as much as possible, but time is a cruel taskmaster. I used to play a LOT of video games, and I do have a Nintendo Switch and a gaming PC, but any time I spend on there now tends to be playing Lego games in co-op with my son. I’m much more successful carving out tabletop gaming time. I meet up with a bunch of friends most Sunday evenings to play board games (and tend to tweet a lot during those sessions!). Once a month, I meet up via Google Hangouts with a bunch of fantasy authors (Timandra Whitecastle, David Benem, Josiah Bancroft and Phil Tucker) to play Dungeons & Dragons. We’ve recently started to release our games sessions as a podcast, Crit Faced.

Oh, I like catching people off guard, I guess. Bring them to a place they’ve not been to before, share unusual characters and settings. Hopefully the story they finish isn’t quite the story they believed it was when they began.

With regards to overall career, I definitely aspire to making this a full-time gig in the next few years, but that is still a long road to travel, albeit a road I’m pretty confident I’m on, now. As I mentioned earlier, I’m very fortunate to have found a readership who like what I do, and that readership keeps growing. One of these days, it’ll be nice to put aside the never-mentioned day job and focus on story all the time.

With regards to the types of stories, I’ve been jumping around the Yarnsworld for the first three novels, visiting different locations and different characters. For the next few Yarnsworld books, I’d like to revisit some of those locations, see how those stories have developed over time. In saying that, I read Nick Eames’ Kings of the Wyld last year, and that book hit me like a sledgehammer. It was fun, just pure, unfiltered fun. I would love to create something that made readers feel a fraction of that, and that desire is weighing on my mind a lot as I figure out which projects to tackle next…